The Other Side is an installation that was created for the student section for Prague Quadrennial of Performance Design and Space in 2015. It awarded with the gold medal for the best exposition in the Student Section and the Children’s Audience Award. During the project, I mostly worked on interaction design, Arduino coding, and also did the tracking program for the sound and lights.

Together with  Guy Dowsett, the sound designer, we built a system with different sounds for up to ten different people playing with the wall. The audio was reacting to approach, touch, push and connect. Eero Erkamo designed the lights that were activated when someone approached the wall. Some of the armatures were changing brightness depending on the outside light.

Image from the tracking program: 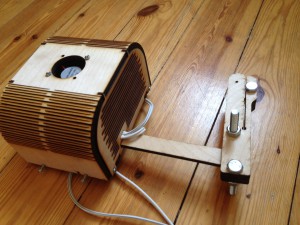 I also made a device to shake the wall when it is pushed and approached, but I scrapped it because of the lack of time. The first image is the magnetic attachment to the wall and stepper motor. The second image shows the motor-driver with a clamp to secure it to the wall structure.