A research project working with SOPI research group at Aalto University. The instrument NOISA learns how you play, tracks how concentrated you are while playing and then plays with you. Niklas updated the code, interaction, added pressure sensors and rebuilt the internal design. 2016-2017.

While good physical health receives more attention, psychological wellbeing is an essential component of a happy existence. An everyday source of psychological wellbeing is the voluntary practice of skilled activities one is good at. Taking musical creation as one such skilled activity, in this work we employ an interaction method to monitor varying levels of engagement of musicians improvising on a desk-top robotic musical interface (a network of intelligent sonic agents).

The system observes the performer and estimates her/his changing level of engagement during the performance , while learning the musical discourse. When engagement levels drop, the musical instrument makes subtle interventions, coherent with the compositional process, until the performer’s engagement levels recover. In a user study, we observed and measured the behaviour of our system as it deals with losses of performer focus provoked by the controlled introduction of external distractors. We also observed that being engaged in our musical creative activity contributed positively to participants’ psychological wellbeing. This approach can be extended to other human activities.

Interactive 3D shape as a project proposal for HSL, made together with SOPI research group. A pulsing heart of Helsinki. It reads real-time data and maps it to a chosen 3D shape. Creating the paths of the local traffic in the center of Helsinki, while visualizing also other data like speedometer and bus numbers. 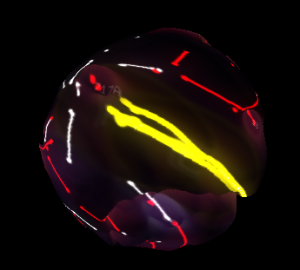